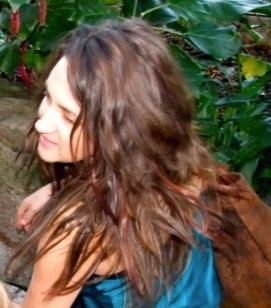 Christine Hume is the author of The Saturation Project (Solid Objects, 2019), a lyric memoir in the form of three interlinked essays, as well as three books of poetry. Her chapbooks include Lullaby: Speculations on the First Active Sense (Ugly Duckling Presse, 2008), Ventifacts (Omnidawn, 2012), Atalanta: an Anatomy (Essay Press, 2016), and a collaboration with Jeff Clark, Question Like a Face (Image Text Ithaca, 2017). She teaches in the interdisciplinary creative writing program at Eastern Michigan University.

Question Like A Face, by Christine Hume and Jeff Clark, is the second in an ITI Press series of pocket-sized, hard-bound, image-text collaborations between a writer and a visual artist. In powerful prose, Christine Hume looks at gender violence and complicity within the intimate and immediate interiors of a small city in Michigan. Like any tale of power, this one begins with the careless dismissal of a whole life.

Compelled by the constantly defaced and reappearing face of a young black woman shot by a white cop, whose image is affixed to walls around her community, Hume summons her visage as a call to outrage against her own complacency and against the silence surrounding our culture’s unending violence against women, especially women of color. She writes, I am living in a city that proliferates a question like a face. Her face appears and disappears on civic surfaces, her face replaces a blank space; her face replaces the city, piece by piece, claiming it, because her face is half hidden, in the half-light of waiting, half blowing in the wind, half stuck to the present, near a house where my family lives, where a young girl can look at it and think “not me.” A sequence of domestic photographs from police evidence files–hauntingly selected and cropped by Clark, punctuate Hume’s accounts with their simple, familiar violence.

About Shot: In alternating currents of prose and verse, SHOT reaches beyond the tradition of the nocturne to illuminate contradictory impulses and intensities of night. SHOT inhabits the sinister, visionary, intimate, haunted, erotic capacities to see and hear things at night, in the fertile void containing our own psychological and physical darkness. Via Levinas who locates self-knowledge and ethical contract in insomnia, this darkness is one “stuck full of eyes.” Here the insomniac falls into a Beckettian pattern of waiting, in an inextricable dialogue with a selfhood that cannot settle down. In a perpetual play between empirical and abstract knowledge, tantrum and meditation, SHOT creates torque that drives beyond material experience.